Migration is ultimately an individual decision, with most gains and losses accruing directly to the individual migrant. Ideally the freedom to move to wherever one feels better equipped to provide a living for herself and her family should be taken as an absolute value. But there are of course practical considerations when countries host immigrants, particularly in times of increasing anti-immigration sentiment.

Many of these practicalities have to do with the not so clear-cut benefits and costs of migration for the individual herself. Individual gains for immigrants depend on proper integration, often closely related to the ability to find and keep a job. Job market integration requires cognitive skills (related to language proficiency, understanding of job search processes, and other country-specific factors), and non-cognitive factors (such as the belief that all potential workers will be considered for any job regardless of their nationality, and that being an immigrant is not a synonym of being segregated out of the job market). Job market integration is far from effective in very much all European countries and designing policies to promote it is crucial for good immigrant integration – and ultimately to improve security and fight populist anti-immigration arguments.

In addition to integration and desegregation of individual immigrants, it is also important to consider the individual costs of migration. Refugees leave situations where death is close to certain, and hence their cost of migrating is close to zero. But that is not the case for most migrants who arrive to Europe in hope of better life prospects via illegal smugglers. These migrants often leave their home countries without knowing the risks they face in their migration journeys. Most West African migrants heading to Europe are nowadays crossing the desert to get to Libya, and go from there to Italy by sea. This is a perilous route, and the most dangerous part is not the media highlighted crossing of the Mediterranean. Many of those leaving their countries en route to Europe lose their lives in the desert or are enslaved after arriving in Libya. And this is not commonly known in their home villages and among other potential migrants. Policies that promote good information about the risks of illegal migration to Europe, together with the actual benefits – which are often exaggerated by misinformed potential migrants – is a policy that should be more strongly promoted by Europe, even if only with these potential migrants welfare in mind.

Moving from individual migrants to Europe as a whole, the impact that recent waves of immigration may bring is increasingly being questioned. Often times, arguments focus thinly on the grounds that immigrants will take jobs away, depress salaries, abuse public services, or increase crime rates. The evidence to support these claims is not strong. Overall a number of studies show that host countries tend to win not only in terms of productivity and diversity, but also in terms of strengthened public services and social security, as immigrants pay for more than what they use in public services. There is no evidence generally supportive of increased crime rates. If anything, the evidence shows that most negative effects of immigration affect the wages and job positions available to other immigrants of similar qualifications who arrived before the new immigrants. While this evidence can justify why we often observe long-term immigrants associated with the recent populist anti-immigration movements, there is clearly scope for policies to inform public opinion about the actual impact of immigration in Europe.

Last but definitely not least, there is a growing body of evidence that shows that international migration is in itself a development tool that can raise standards of living in the countries of origin, and in this way self-sustains further migration flows. This happens because of “brain gain” type of effects through which international migration increases welfare at home through more investment in education and health of children left behind, better accountability and political institutions, more entrepreneurship and business investment, improved financial systems, increased foreign direct investment and international trade.

A holistic view of the consequences of immigration flows to Europe over time requires integrating all of these different factors. A narrower view ignoring how international migration acts as a wheel for broad change defeats our ability to properly answer this challenge of our times.

This article was originally published in EC Global Review 2017 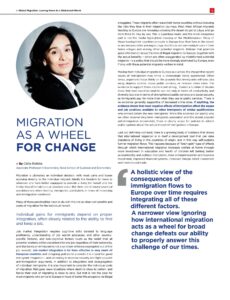