The objective of this work is to develop an operational tool to analyze exchange rate pressure in the context of Angola. The Angolan economy exhibits a number of relevant characteristics: a closed financial account, a partially controlled current account, a highly dollarized economy and exports (oil) price determined in World markets. These features have a direct effect on the demand of foreign currency and motivate their inclusion in the specification of a model for Angola. The model provides the rational for a measure of an exchange market rate pressure (EMP) index that contains exports changes, imports changes, the foreign interest rate and inflation and the change in foreign reserves corrected for a measure dollarization. The empirical performance new measure is comparable (slightly better) to the performance of the EMP indexes obtained in Eichengreen Rose and Wyplosz (1994) and Klassen and Jager (2011).

Sexual Violence as a Weapon of War

Conditional Cash Transfers and the Learning Crisis: Evidence from Tayssir Scale-up in Morocco

Can Technology Improve the Classroom Experience in Primary Education? An African Experiment on a Worldwide Program 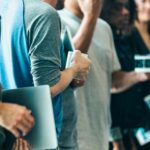