Tavneet Suri is the Louis E. Seley Professor of Applied Economics and an Associate Professor of Applied Economics at the MIT Sloan School of Management. Additionally, she is the editor-in-chief of VoxDev; Scientific Director for Africa for J-PAL; Co-Chair of the Agricultural Technology Adoption Initiative at J-PAL; a Faculty Research Fellow at the National Bureau of Economic Research; and a board member of BREAD.

Her impressive work leads us through a journey of the impact on economic development of technological advancements.

Starting with seminal work on the empirical puzzle for developing countries that is low adoption rates of technologies that could dramatically increase profits. In Suri (2011), this was explored using hybrid maize that increases average farm profit dramatically. She concludes that technological adoption decisions appear to be rational and well explained by the variation (observed and unobserved) in heterogeneous net benefits to the technology.

Moving on to the decade long research on the role of the mobile money technology for the developing world, Jack et al (2010) produce a descriptive and theoretical article about the launch of the M-PESA in Kenya. Suri and Jack (2016), discuss the impacts of the Kenyan mobile money system M-PESA on the lives of Kenyan households, inferring that it increased per capita consumption levels and lifted 194,000 households, or 2% of Kenyan households, out of poverty. Additionally, they discuss the more pronounced results for female-headed households, showing that the changes were driven by changes in financial behaviour and labor market outcomes. Suri (2017), discusses however how adoption still lags in many economies and, even where there is universal adoption, product innovation over the rails of these digital accounts has been slow.

Moving away from mobile money, an important topic for which technology is less discussed is governance. According to Bhattacharya and Suri (2017), introducing e-government is not as much a technology challenge as one that requires patience and a strategic approach by first reducing process inefficiencies; second, driving regulatory change; and third, IT automation – in that order. There is no silver bullet, but IT is essential to institutional infrastructure and, thereby, to the equitable delivery of public goods in emerging markets.

More recent work on new technologies is focused on Fintech tools. More specifically, Bharadwaj et al (2019) are the first to document the impact on individuals of fully digital access to credit. They study the take up and impact of M-Shwari launched in 2012, a popular digital loan product accessed and delivered through mobile phones. They conclude that even though there is an important role being played by digital loans, namely on financial access and resilience to shocks, it is not leading to effects on investments and savings. This result will certainly lead to more research on solutions for the credit market failures.

Her work, however, expands beyond the realms of the economic development that might be brought about by technological advancements. 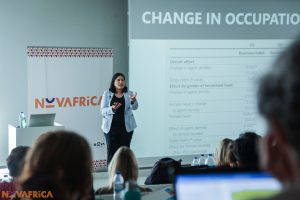 Her work on Ethnic Patronage in a Kenyan Slum (Marx et al, 2015), uses unique data of the Kiberia slum in Nairobi to provide evidence of ethnic patronage in the determination of the rental prices and investments.

Additionally, she has also been involved in trying to understand what the role of Universal Basic Income (UBI) in developing countries can be. In Banerjee et al (2019) a first step is taken discussing what is already known with regards to what would recipients would likely do with the increase in income, whether this would lead to more economic growth and whether it is worth considering targeting instead of giving money to everyone. This first step will certainly be followed by the results on the 12 year randomized study with 14,474 households being presently conducted on UBI in two counties in Kenya.